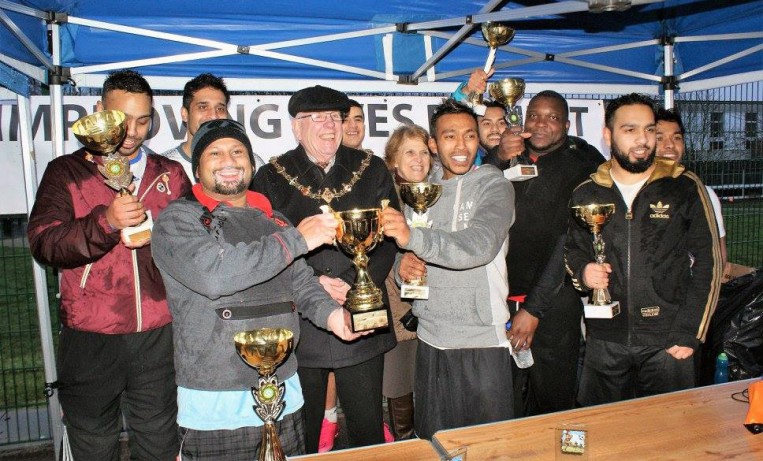 Human Rights & Equalities Charnwood’s Improving Lives Project (funded by the Big Lottery Fund) held a football tournament on Sunday 29th January at Charnwood College from 10.30am to 5pm. 12 teams from across different cultures and backgrounds came together for a friendly competitive tournament.

The aim of our project is to build bridges and bring individuals and communities together to celebrate diversity, we are proud of our communities in Loughborough. It was great seeing teams from Carpenters Arms, Swaminarayan Hindu Mission as well as the local Bangladeshi, Kurdish and Iraqi communities.

Despite the weather, spirits were high and there was a buzzing atmosphere as teams played a knock-out tournament during the day through to the finals.

The winners, Fusion Boyz (team name), and the runners up, Infiltration (team name) were awarded trophies by the Mayor of Charnwood, Cllr David Gaskell who came along and watched the quarter, semi and final matches.

We would like to thank key individuals who helped organise this event, especially Hiron Miah, Neighbourhood Development Officer at Charnwood Borough Council, Abdul Hye, Rhuf Miah (both local individuals from the Bangladeshi community) and our project staff, Kazi Mashud and Mehraj Alamgir.

It is uplifting, especially in this current climate to see communities coming together to celebrate diversity.

Quoting Dr Jill Vincent, one of the trustees of HR&EC:
'I'm from a football mad family and went along with my grand-daughter and we had a brilliant afternoon (despite the unkind weather). It was a delight watching so many teams play with such enthusiasm; big congratulations to all the organisers for such an achievement, and to all the teams. And when the Mayor presented the cups to all the finalists and in particular the winning team, there were the loudest cheers. Football is an excellent way to bring us all together.'